One of the 20 scenes that make up the scroll

It is considered one of the highlights of the museum. Measuring nearly 18 meters and painted almost two hundred years ago, the Pacifying of the South China Sea scroll offers a unique learning opportunity to visitors at the Hong Kong Maritime Museum.

Each section comes with a caption, this one translates to ‘Coastal Defence forces map out their strategy’

An unknown Qing painter divided the scroll into twenty individual scenes. Each section is marked by four Chinese characters originally intended to allow the viewer to carefully follow the story as they unrolled the silk fabric.  The scenes depict pirate ships, Han troops, battle scenes, rich pageantry, everyday life, and celebration. The scroll chronicles events that took place over a two-year period and the painting accurately shows the changes from spring to summer and autumn to winter, with the foliage on the trees and the garments of the people depicted on the surface moving through time. The story tells how Chinese piracy was subdued in the early 19th century by the forces of the Emperor. 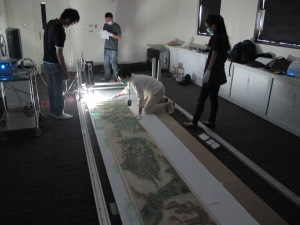 The length of the scroll makes it a difficult piece to display in its entirety.

I was given the charge to take this wonderful object and create two digital exhibitions that would accompany the original in the new galleries of Pier 8 Central. One of the reasons that a digital interpretation was chosen is because of the limitations of the original piece. It was recognized that because of its length, the museum would not be able to show each of the twenty scenes at any one time. Also the painting depicts a complicated story filled with symbolism that without interpretive pieces to accompany the different sections, the nuances and the meaning of the scroll would be lost to the visitor. Lastly, because of its age and fragility, the original may not be able to be displayed indefinitely.

As with any project, the core beginning of creating an exhibition is starting with good information. One of the fortunate things is that the events of the early 19th century and the problems of piracy in the Hong Kong area are well documented. In particular there are primary sources like , History of the Pirates Who Infested the Sea From 1807 to 1810, written by Yung-Lun Yüan in 1830 that help make sense of this complicated story.

It was only when a great collection of data was brought together about the people, places and the events that the scroll shows, that a digital interpretive plan could be laid out. Without the hard work of historians like Dr. Stephen Davies, who first began unravelling these pieces years ago, this project could not have been possible. 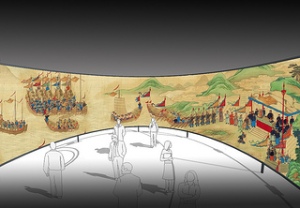 I hope to write more about the details of the two digital projects that are being prepared for the exhibition spaces. But at this time, both are still being in the works. But the general idea is that the first project is to create a 360° theatrical presentation in which visitors will encounter animated sections of the scroll along with lighting and sound effects. The second project involves creating a digital touch screen of the scroll with hotspots that highlight the meaning of each of the different characters and scenes.

Before theses two projects could proceed however, there was a realization that better digital copies were needed. The scroll was originally photographed seven years ago and although high quality tiffs were created, the quality was still not high enough for animators to create seamless transitions of movement. And the touch screen demanded that visitors would have the ability to see a pimple on the end of a person’s nose, even though many of the characters on the original piece are less than a 1cm high. Truly one of the reasons that this scroll is such a treasure is that each section is carefully painted with fine detail and accuracy. Many of the minute details have never been fully appreciated or shared with the public. And that is why a 100% digital scan of the scroll was necessary.

The Importance of Having Good Partners

When undertaking a major digitization project, it is important to work with professionals. The museum was fortunate to make contact with Dr. Ari Ide-Ektessabi of Kyoto University. He is one of the leading figures in marrying advanced technologies and cultural heritage. His expertise includes not only producing higher resolution and dpi of cultural objects, but an advanced manner of color representation. His team just recently completed scanning the original blueprints of the RMS Titanic. 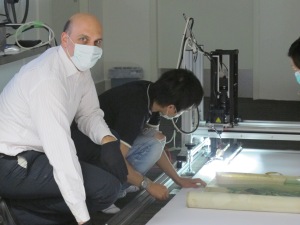 Fragile objects like the Qing scroll cannot be unrolled on a daily basis. That means each time it is brought out for examination, the work done on it has to count.  Dr. Ide-Ektessabi’s techniques include non-invasive procedures that do not harm the scroll. It was upon his recommendation that the scroll was to be captured at an amazing 1200 dpi. Simply put, for every inch of the scroll there would be 1200 pixels created in a lossless digital file.

For example, an iPhone has 326 pixels across its width which means a figure on the scroll which is a quarter of inch wide would fill the entire screen at perfect clarity without any enlarging or pixelization. Now imagine what that means in an application in which a high definition monitor or a four-foot projection is employed. The possibilities become limitless.

The scroll was scanned at 15 cm at a time. In all, it took over 150 individual passes to capture the entire length. In all 100GB of data was collected. With each pass the quality was checked. Curatorial staff of the museum immediately became engaged in the project as more images came to light. Some details less than an eighth of a centimeter high had never been noticed before, but now displayed on a large monitor the minute details came into focus. Perhaps only the original painter had only known these details existed before now?

This type of scanning will not only provides the museum with a high quality archival digital copy of the scroll but a mechanism for scholars all over the world to study even the smallest detail. It will be an important resource for the museum for years to come.

Digitization will never replace the original but this technology should be seen as an equal partner. Digitization projects that focus on a higher quality capture will allow cultural institutions to promote research, preservation, display and presentation. By unlocking the digital world, the originals will hold a higher level of relevance in collection by increasing access to their knowledge.