I was recently asked to contribute to the Royal BC Museum’s Quarterly newsletter, Curious. It was a great opportunity! In particular I would like to thank the editor for all her help and ease of process.

This article is short and fun and is meant to highlight  some of the research I have recently completed for an upcoming exhibition I worked on at the Hong Kong Maritime Museum. Enjoy!

Please let me know if you have any comments. 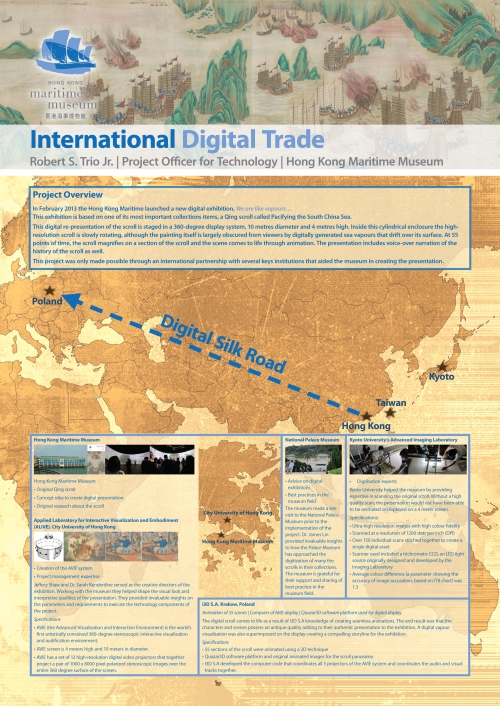 One of the great aspects of being based in Hong Kong is that it is geographically located in the right spot. Since the days of the China Trade, its location as the crossroads of east and west gave this location the unique distinction of where goods and more importantly ideas converged.

As the project manager for the Hong Kong Maritime Museum’s digital exhibition, We are like vapours … I took advantage of these ancient trade routes to bring together a group of talented practitioners to help the museum reopen to the public with one of the most dynamic and inspiring digital exhibitions ever to hit the Hong Kong scene.

In March, I presented a poster at the TELDAP conference in Taipei in support of this year’s theme, International Partnerships. Preparing and assembling the information for this session helped me to outline the key pieces of this exhibition.

Approximately two years ago, I was approached by the Director of the Maritime Museum to prepare a concept for an exhibition based on one of the most significant pieces in the collection, a Qing scroll called Pacifying the South China Sea. This scroll is 18 meters log and 55 centimeters high. As an interpretive piece for a museum, it is wonderful. The scroll tells the story of pirates, sea battles, love and betrayal. It would be a suitable major motion picture staring Chow Yun Fat.

But the nature of the scroll being so large and also so fragile made it a difficult object to display in situ. Most of the details and symbolism are lost in the fine detail that is only appreciate if one is holding the object in their own hands and at an arm’s length.

Based on some previous digital forays, I began investing other scroll exhibitions that used a digital platform. In the end, I prepared a brief that had several elements: digital projection of the scroll, key scenes animated to add clarity of the storyline and using vapours superimposed on the scene. Vapours were chosen because there is an early Chinese history that attributes a quote to one of the key pirates of the narrative, Zhang Bao in which he states, “We are like vapours” in order to illustrate this fleeting moments of his actions and how they will soon dissipate in time.

Ideas are great. But in the end, it takes experience and best practices to make a concept a reality. The most important moment in this process was when I met Sarah Kenderdine at City University of Hong Kong.  Over the past few years City University’s ALiVE laboratory has broken new ground in the area of augmented reality and immersive experiences.

Sarah and her team proved to be the missing link of the project. The museum formed a partnership with City University to create a joint project combining their expertise in the area of digital media and the museum’s expertise in the history and significance of the scroll.

The second piece or port of call was Kyoto University. Kyoto scanned the scroll at an amazing 1200 dpi and extreme color fidelity. I have already written a little about this experience in my article Extreme Digitization.

Lastly, I traveled along the Digital Silk Road to Poland. In Poland the museum hire i3D to give the scroll new life. They created a series of 55 animations and created the programming that allows the scroll to digitally be seen by the visitor. One of the most difficult things about the presentation is that there are 5 separate projectors in the presentation. And the presentation is always scrolling, so the action does not just occur on one spot of the 360° screen but the entire surface.

The animation also had to be done in such a way that that the original artwork had to be respected. In the end the scenes were done in a 2D format that make the characters look like Qing Dynasty figures in action, not 21st cartoons.

The museum benefited from having a talented team of international partners. Each partner brought an energy and expertise and could not have been produced in-house by the museum. This combined strength yielded a result that was greater than the parts.

Lastly, the sustainability issue: partnerships are based on relationships. And the relationships formed by the museum will help serve as the platform where many more exciting projects can grow.